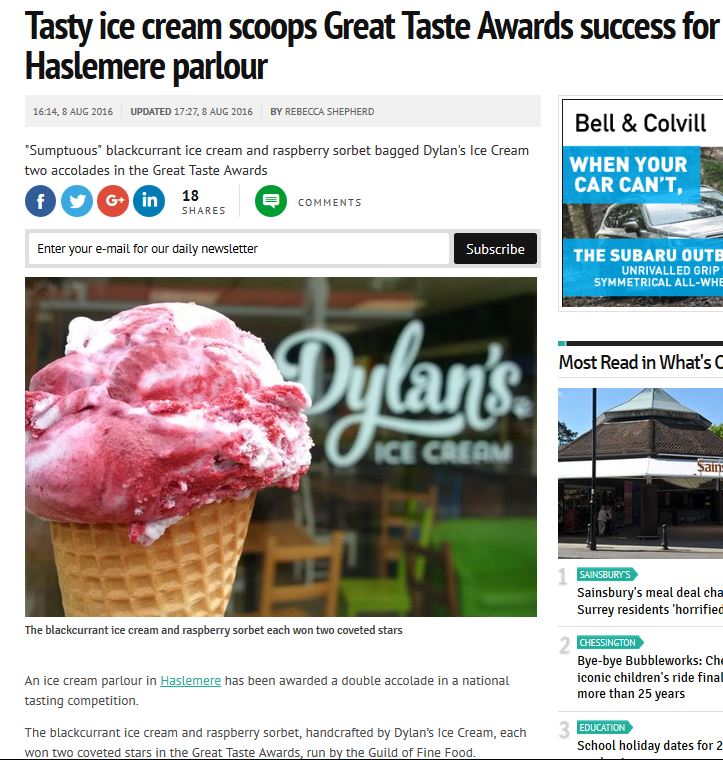 They loved the words we did for their website so Editing Edge were the first point of call when Dylan’s Ice Cream needed to tell the world about their winning streak at the Great Taste Awards.

Dylan’s Ice Cream were awarded two 2 star awards at the Great Taste Awards for their Blackcurrant Ice Cream and Raspberry Sorbet. They were keen to tell the story in the local press and also to take the opportunity to say they were looking to move production to a bigger unit and looking for suitable premises.

Once again we delighted in the opportunity to use lip-smacking phrases in our press release to describe the ice-creams and the award process.  With their shop in Haslemere and the production premises in Langrish we produced slightly different press releases tailored to the local media in each area.

The press release appeared in the Petersfield Post, the Surrey Advertiser, several news websites as well as the front page of the Haslemere Herald. Ben from Dylan’s was very pleased with the result and told us the publicity worked well for them.

You can read the full press release on their website here.

Got a great story to tell the world? Make sure your press release gets noticed

If you want a press release that will catch a journalist attention and make headlines news, get in touch with us at Editing Edge.